Blue light: What is it? What does it do and how can be block it?

What is blue light and what does it do?

Daylight is invisible, but you only see it when it reflects off a material. It consists of all visible wavelengths of the light spectrum, more commonly known as all the colors of the rainbow. The blue light is at the end of the visible part of the light spectrum, right next to the invisible ultra violet light (UV-A, UV-B and UV-C). Blue light comes from various sources. For example, blue light naturally comes from the sun, but also from your telephone or laptop. In many cases, it appears that light sources closest to our eyes have a large share in the exposure to blue light. So you experience more exposure to blue light from your phone than from the television, which is usually at a greater distance from your eyes.

Is blue light harmful? Blue light is only harmful if you observe it in the form UVA, UVB or UVC, the invisible part of the spectrum. The light sources (lamps, screens, etc.) that we see every day do not or hardly radiate this. The CIE (International Comisson on Illumination) describes extensively in articles that light sources that we see every day do not pose a danger to the eyes. It can be experienced as unpleasant, however, this differs per person. 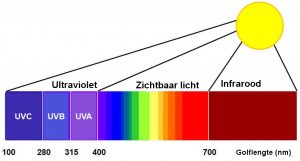 When do we need blue light?

What exactly does that blue light do to us? Blue light is important to us humans because we just need it. The human body reacts powerfully to the blue light, which means that our body processes start in the morning. Because blue light is perceived in the eyes, the body receives a signal in the morning to stimulate cortisol production. Cortisol is an energy hormone that ensures that the body knows that the day is about to start and the body has to start up.

Besides the fact that we need blue light, we can also sometimes not use it, for example when you want to go to bed. Then the stimulation of the hormone cortisol is not necessary, but we want to stimulate the production of melatonin. Melatonin is a nighttime hormone that is stimulated by the perception of darkness, in other words in the absence of light. If we want to stimulate this production, we have to filter the blue light from the environment. This applies not only to daylight, but also to the light that we perceive from our screens and lamps in the living room, bathroom and bedroom.

How can we filter blue light?

As described above, it can be helpful for people to filter out blue light, especially before going to bed. But how can you filter blue light? There are a number of different options for effectively eliminating blue light. A first option is to switch off all monitors half an hour to an hour before going to bed. This has the effect that only natural, blue-poor light is perceived by the eyes.

Another option is to wear Propeaq light glasses. These glasses have included orange lenses that block all different shades of blue in the visible light spectrum. This allows you to continue to use the screens in the house without being bothered before going to sleep. A third, admittedly interim solution, is activating “night mode” on screens. As a result, the blue light is partially blocked, less effectively. This is also visible, the screen then becomes reddish in color.

What one should especially not do is to wear so-called “computer glasses” or “blue light filter glasses”. These glasses are widely available and are sold on the grounds that they completely block the blue light. In practice this turns out not to be the case. Propeaq investigated and put it to the test. Various types of glasses of this type have been extensively tested by Propeaq. The test group consisted of “cheap”, “moderately expensive” and “expensive” computer glasses. These glasses were tested using a calibrated UPRTek MK350 spectrometer to measure which part of the spectrum was transmitted through the glasses. The results are shown below.

To give a good idea of how the computer glasses work, below is an image of the daylight that the different glasses let through. This graph shows the entire spectrum of light, including the blue part. Second, the “average expensive” glasses were tested. These glasses cost about twenty euros. As the image below shows, there is little or no difference with the cheap version, and this variant also allows a considerable part of the blue light to pass through. There is only a minimal difference visible when these two graphs are compared. Thirdly, the “expensive” variant has been tested by Propeaq. This frame costs about fifty euros, by far the most expensive of the test group. These glasses work better, but still minimal. There is a slight increase in the amount of blue light that these glasses block. Of course we cannot conclude the test without also subjecting the Propeaq light glasses to this test again. The image below shows that the entire blue spectrum and even part of the green spectrum is blocked thanks to the orange lenses that are included. A number of conclusions can be drawn. We humans need blue light to function during the day. In the evening / night we don’t want blue light because we want to sleep. The blue light, which is perceived by the eye through the sun and by lamps and screens, is not harmful. If we want to block blue light, for example for our night’s rest, there are a number of options. The displays can be switched off completely or placed in “night mode”. In addition, glasses can be purchased, this can be a Propeaq, or other glasses with orange lenses. These glasses block the entire blue spectrum. It is better not to purchase computer glasses as they have very little or no effect.

How melatonin supports the immune system

The immune system is more relevant today than ever. This system ensures that we do not get sick from various...

A disrupted circadian rhythm affects our body and brain

Your circadian rhythm is extremely important. We have said that many times, and we will keep telling you. Studies show...

Use light therapy to boost your libido

Your sex drive can be disrupted in various ways, which causes a lower libido. This is a natural and common...

Special times require special solutions, one of those solutions is to work from home as much as possible. We no...

Morning walks can be beneficial to our health

With the current situation regarding COVID-19, we are limited in quite a few different cases. We work from home as...

How light glasses could prevent excessive weight gain on people

Oversleeping has some serious health hazards

There is a vast amount of research that indicates skimping on sleep can negatively affect your health in numerous ways....

Marathon running in combat outfit and with an adapted biological clock

This article is written in Dutch by Joyce de Bruijn: https://amazingerasmusmc.nl/actueel/marathon-rennen-in-gevechtstenue-en-met-aangepaste-biologische-klok/ Professor of Chronobiology Bert van der Horst, professor of...

A recent scientific revelation demonstrated that the internal body clock controls brain waste removal. Previously, it was believed that sleep...

5 Myths about sleep: Truth or Fiction?

There are quite a few myths about sleep. We of course already know that sleep is immensely important for body....

Your circadian rhythm is very important, we of course already knew that. There are a lot of applications where shifting...

Blue light: What is it? What does it do and how can be block it?

What is blue light exactly? And how does it work? Are there glasses that filter blue light? There are quite...

Read More
NextMorning walks can be beneficial to our healthNächster